Some months ago, I acquired a Power Macintosh G3 All-In-One, the so-called Molar Mac, and posted about it here at the Happy Macs blog. As I indicated then that I would, I have spent some time upgrading it, principally adding a much larger hard drive and installing an Iomega ZIP-100 drive into the option slot for it. I partitioned the hard drive such that I now have three bootable partitions and one major “My Files” type partition. I installed Mac OS 8.1, 8.5.1 and 8.6, one into each of the bootable partitions and now have all of them happily co-existing on my AIO. But I digress…

With these hardware and OS upgrades complete, I began a serious “shakedown” of the new AIO. I was not pleased with the results! My “new” ZIP drive is erratic at best, and almost non functional at worst. ZIP disks are only rarely detected when inserted, and in this invisible state, nearly impossible to eject.

Even the time honored insertion of a paperclip into the drive’s mechanical ejection hole fails to deliver the goods. Some research on the web turned up the fact that this is fairly common in older, used Zip drives. Iomega used plastic internal parts for the detection and ejection of disks, and over time the predictable tends to happen – these parts break and the associated functions no longer work. Sigh… I guess I am back in the market for another ZIP disk.
What is more vexing however is the state of the floppy disk drive, or of the floppies themselves, or both! I still haven’t determined where the real culprit lies. 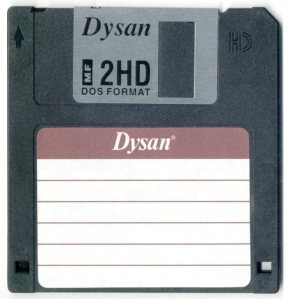 For the most part, when floppies are inserted into the drive, they are recognized as being there, but are presented as “not readable”, accompanied by Mac OS’ ever helpful offer to format them. I say “ever helpful” somewhat sarcastically since accepting this offer results in the usual minute or two of the floppy formatting procedure, terminated by the not so helpful, and definitely not very useful, message that the formatting has failed – no explanation, just that it has failed. This always occurs at the very end, after Mac OS has wasted the full amount of time needed to format the disk.

Initially, I was sanguine about this. “Not a problem” I told myself. “Just a bad disk – I’ll try another”. When that “another” also failed, and then another, and then another, I began to get worried. My first conclusion was the obvious one – the drive must be flakey in some way. The most probable modality of this flakiness was simple “dirt” on the read/write heads and so I acquired a floppy head cleaning kit from eBay (you can get ANYTHING on eBay it seems!).

These kits consist of what looks like a normal floppy disk, but with a cloth circle in the middle where the disk media would normally be, and a bottle of cleaning fluid that can be applied to the cloth circle a drop at a time. After placing a few drops of fluid onto the cloth, you insert the “floppy” into the drive and in blissful ignorance of the real nature of the disk it is now spinning, the floppy drive attempts to read it. This effort brings the read/write heads into contact with the cloth surface, now suffused with cleaning fluid, and this results in cleaning of the heads.

This all sounds very promising, and after repeating this two or three times, I hopefully popped a real floppy into the drive. The initial results were encouraging. The floppy was properly recognized, and was mounted on the desktop. Problem solved, correct? Not so fast. More testing was in order and so I tried writing a file onto the floppy. This did not succeed, failing with a disk write error. Then I tried to format the floppy. This failed as well, in the same way as above. Well, I reasoned, there has been improvements, but just not enough. So, I reran the cleaning process several more times. However, at the conclusion, the results were scarcely better. Now and then I could actually write a file onto the floppy, and now and then I could even read it back, but never, ever could I get the floppy to format successfully.

Still, incremental progress had been achieved, and the conclusion seemed obvious enough – the read/write heads were not being sufficiently cleaned by the cleaning kit. What was needed was a more intensive approach. I needed to remove the drive, disassemble it, and clean it thoroughly. YouTube provided several videos that showed how to do this in detail, and so I undertook the task, armed only with Q-tips and the cleaning fluid from the floppy cleaning kit.

The process was quite simple. After extracting the floppy from the AIO, I used a small flat head screw driver to gently pry the top off of it, as shown in the YouTube videos, and ended up with what you see below:

Then, moistening a Q-tip head with cleaning fluid, I carefully swabbed back and forth across the inside of the read/write head assembly, as shown below:

When done, I reversed the process, reassembling the floppy drive and re-inserting it into the AIO. I now had the ultimate in clean floppy heads, and surely read/write success must lie ahead.

Unfortunately, this was not the case. Same errors, same erratic behavior! This got me thinking. At this point, I could rule out the floppy drive itself as the cause of the issue. This left only the media. Could the floppy’s media surface have degraded to the point that it was no longer usable? I decided to test this theory with my other vintage Macs.

I decided to start with the best-preserved media I could find, so I went out on eBay and found a factory-sealed box of Macintosh formatted 1.4MB floppy disks, still in the original shrink wrap plastic. Then I turned to my trusty PowerMac 7300 as the normative test of whether the floppies were good or not. I was surprised to find that some were, some were not. Even my best machine was having trouble with floppies!

On to my next best machine – my Quadra 840AV. Similar results. Some floppies worked well, some were not recognized as formatted, and there was no consistency in anything. I have a variety of other vintage Macintosh and Power Macintosh machines and I found the same result across almost all of them. Floppy usage is really “touch and go”, and most definitely not reliable. I have only ever successfully formatted a floppy once, that being on the Quadra 840AV. What is going on here?

I titled this piece “The Mystery of the Failing Floppies” and for now, that is where I have to leave it. It IS a mystery, and I am not sure what to chalk up the continual failures and erratic behavior to. I am guessing that it is a combination of age, dirt and media degradation over time, but I cannot be sure. Various sources online indicate that the life expectancy of floppy media is 10-20 years, and both the machines and the media I am using are well beyond that. This is likely the major contributor to the problems I am observing. Perhaps I should be happy that they EVER work!

As to my G3 AIO, I am taking one more crack at the hardware, even given the above. I acquired another floppy drive on eBay and will try it to see how it works. If this fails, I will just need to accept that at least for now, and perhaps forever, I do not have a reliable way to read and write floppies, or I do not have a reliable set of floppy media, or both! As I learn more, I will keep you posted!

One thought on “The Mystery of the Failing Floppies”