In October 2013 I authored a piece for this blog entitled “Fun With Windows 3.1 (on a 68K Mac!)”. That post concerned itself with a native Mac OS program that presented a Windows 3.1 appearance on screen, but reacted to almost every user input with a typically Windows cryptic error message. It was all just a little light-hearted fun, but much to my surprise, that post about this light-hearted fun turned into an enduring favorite, continually in the top hits each month for blog post views.

This inspired me to revisit the topic, but this time “for real”, using Connectix Virtual PC as the vehicle. I have always known that I could run an actual copy of Windows on my Power Macintosh 7300/200 in an emulated PC, and motivated by the ongoing popularity of my first post about Windows an a Mac, I decided to try it and report the results here in this new post of what is quickly becoming the “Fun with Windows” series. 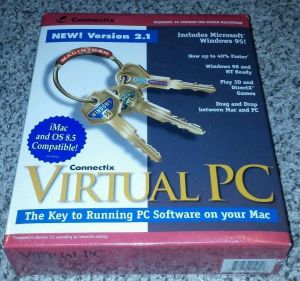 This was a good plan, but it simply didn’t work out. Virtual PC 2.1 installed cleanly and quickly on my Power Macintosh 7300/200 but absolutely refused to run. It WOULD execute, but the result of each execution attempt was a blank 640×480 black window presented on screen, followed by a complete freeze of the host Macintosh. Only a restart would recover sensibility to the machine after that. I repeated the install of Virtual PC 2.1 on my Power Macintosh 7500/366 to test it on a different machine, just in case there was something unique about running it on my 7300/200, but I got exactly the same result. I won’t bore you with all the twists and turns I took trying to achieve a different result, but the net-net of it all was that nothing worked. Virtual PC 2.1 was a non starter.

At this point, I decided it might be best to try another approach. I headed on over to http://www.macintoshgarden.org and downloaded a copy of SoftWindows 3.0, which comes with a bundled copy of Windows 3.1. Perhaps Windows 95 was just too much for these humble Macintoshes – the lesser Windows 3.1 might be a safer way to start. 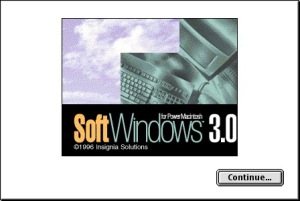 SoftWindows 3.0 installed quickly and cleanly as well, and left a folder called “SoftWindows 3” in the root of my Mac’s hard drive. Inside, there was an app rather obviously emblazoned with the Windows logo and called SoftWindows.

I launched this app and lo and behold, a very familiar looking 640×480 black window popped up on screen… only this time, the machine didn’t freeze, and the typical DOS startup gibberish clattered by, ultimately settling down to a stable DOS prompt. Well, this looked promising.

So, how does one start Windows from DOS? One types “win” at the DOS prompt of course, and I did just that. Fairly quickly, the good ol’ Windows 3.1 splash screen popped up 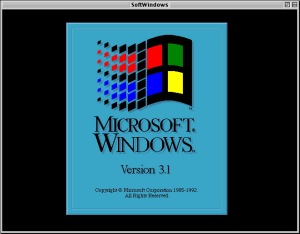 and shortly thereafter I was presented with a 640×480 Windows 3.1 desktop! Everything I tried seemed to work just as you would expect, and there were even DOS drive letters for all the physical device on my Macintosh. The only real drawback was that it was restricted to 256 colors, and nothing I could do would entice it to user a higher color density. I was however at least able to increase the desktop size to a more usable 800×600. 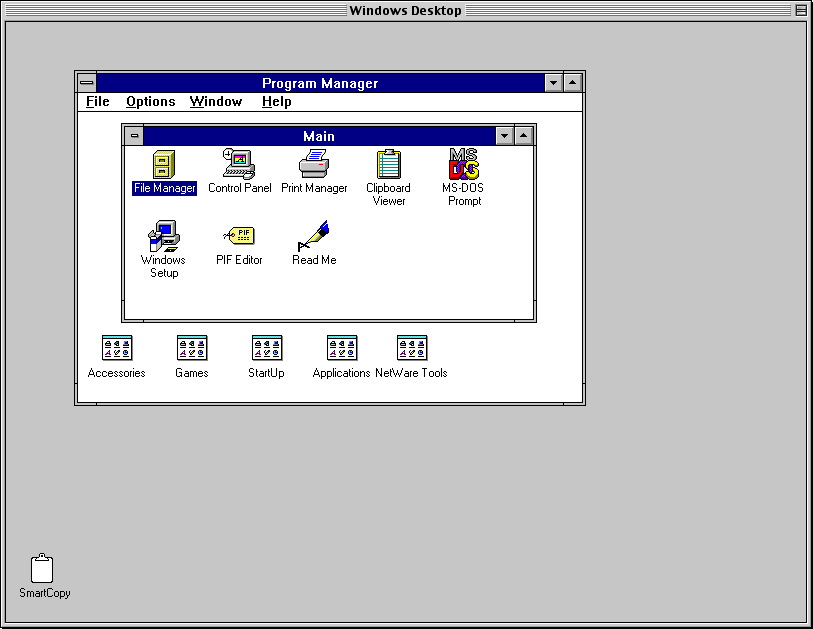 Performance was surprisingly good, considering that this was Windows running on an emulated 486 on a 200 MHz PowerPC 604e. There was a shared directory between the virtual Windows machine and the physical Macintosh host, and I used that directory to transfer over a few Win3.1 programs. All of them installed as expected and ran well. I even managed to install the Win32s 32-bit subsystem into this emulated Windows 3.1 environment! All in all, not bad.

Encouraged by this result, I decided to try Windows 95 again, this time via the good graces of SoftWindows 95, also available from Macintosh Garden. SoftWindows 95, as you might guess from its name, includes a copy of Windows 95.

This too installed cleanly and left a folder called SoftWindows 95 in the root of the Macintosh hard drive. This folder contained an application also called Soft Windows 95, and like its Windows 3.1 sibling, it ran cleanly when launched. Unlike its Windows 3.1 sibling however, it did NOT run quickly when launched. However, it eventually presented a full and working Windows 95 desktop.

Right clicking was accommodated not in the usual Macintosh way (CTL-click) but rather by selecting the icon in question with a click of the Macintosh mouse and then pressing the keypad “=” sign. Odd, but usable.

Right clicking may have been usable, but the overall experience was not. It was just too sloooow! Windows 95 running on an emulated 486, itself running on a 200 MHz PowerPC 604e, was just not responsive enough to be usable. It worked, but it lagged… badly.

Conclusion: Windows 3.1 runs fairly well under emulation on my Power Macintosh 7300/200, but Windows 95 is just too heavy a piece of software for this environment.

Well then! A new environment was obviously in order. I shifted my attention to my Power Macintosh 7500/366 and installed Virtual PC 3.0 (with its copy of Windows 98) there. This proceeded without issue, but then something unexpected happened. You will recall that I tried installing Virtual PC 2.1 on this same machine earlier and it had failed badly. However, I had not removed the files it left behind – I had just moved on to Soft Windows 3.0 on the Power Macintosh 7300/200. The Virtual PC 2.1 installation was still there on the 7500/366, still containing its copy of Windows 95, and Virtual PC 3.0 found this image and ran it instead of its own Windows 98 image!

This was a fortuitous event! Windows 95 burst into life with a spring in its step and was very responsive on this new, faster Macintosh.

This seems like a MASSIVE failure on Connectix part, and I am at a loss to explain it. However, having been a Windows 95 user “back in the day”, and being a total packrat to this very day, I still had my Windows 95 serial number and was able to get past this roadblock. I wonder what Connectix intended its less fortunate users to do? We shall never know!

The above screen shot shows some really nice enhancements that Virtual PC 3.0 provides over its Soft Windows 95 predecessor. Note the presence of the HD, CD-ROM, Ethernet and USB status lights on the lower right of the screen. These work the same way as the equivalent LED indicators on physical PC hardware and are quite a nice touch.

The initial C:\ drive image was a paltry 130 MB, and so I quit Windows 95 and used the included Disk Expander utility to raise this up to the maximum supported value, a still scant 511 MB. I then restarted Windows 95 and used Virtual PC itself to create an additional 1.25 GB D:\ drive. At this point, I had a pretty nicely configured Windows 95 base system.

Virtual PC was a little more Mac friendly than Soft Windows – right clicking was supported in the usual Mac way – CTL-click. Everything worked “out of the box”, sound, disk and even internet access. It was fun to watch an old copy of Internet Explorer 4.72 attempt to render today’s incredibly heavy and complex web pages. It was not a pretty sight! 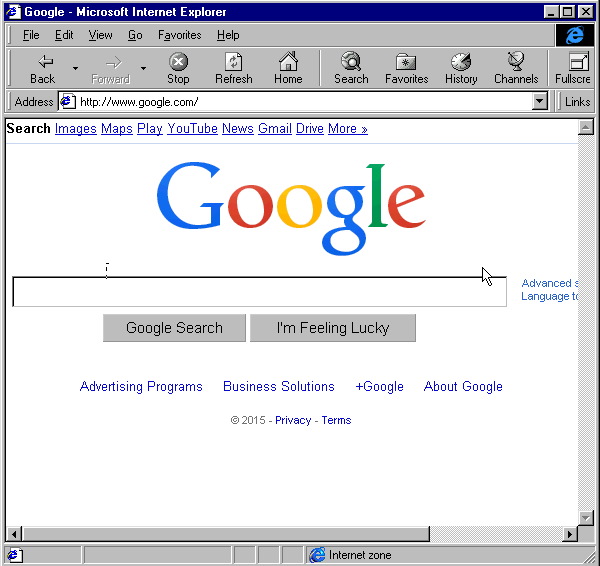 So, what about the Windows 98 that had came with Virtual PC 3.0? I tried that image out as well after I had had my fill of configuring Windows 95. This image ran cleanly too, but rather like Windows 95 on my 200 MHz Power Macintosh 7300, Windows 98 on this 366 MHz G3 was just a little too heavy. It ran, but it ran slowly. The installer took an eternity to do its thing, but the OS itself ran a bit more quickly once installed and loaded. Still, it was too slow to be really useful, and I decided that I should try it on my Power Mac G4 Cube some day, which has been upgraded to a 1.2 Ghz G4. If I ever do that, I will post another article in this series to let you know how it went.

The overall experience was still slower than I would have liked, but it was at least usable. It was not an environment I would want to work in daily, but it got the job done… if perhaps at its own pace. Oh, and under Virtual PC 3.0, Windows 95 let me increase the color density to 16 bits, delivering a much more pleasing look than was possible with the 8 bit color depth imposed by the Soft Windows 95.

So, in conclusion, if you have a hankering to have fun with Windows on a PowerPC Macintosh, and you have a machine with less than a G3 processor, stick with Windows 3.1 installed via Soft Windows 3. On G3s and above, try out both Windows 95 and Windows 98, via Virtual PC 2.1 and Virtual PC 3.0 respectively. You should be fairly pleased with the performance of Windows 95. Your experience of Windows 98 will be directly dependent upon the speed of your machine. I would recommend 450 MHz and above for a reasonable result.

In the next post of this series, I will share with you the results of some head-to-head performance comparisons I ran between Windows 3.1 apps running under Soft Windows 3.0 (Windows 3.1) on a 200 MHz PowerPC 604e (Power Macintosh 7300/200) and the same apps executing natively under Windows for Workgroups 3.1 on a 100 MHz 486DX4. Stay tuned!