At work, my computing needs were fulfilled by a Macintosh Quadra. At home, I had just taken delivery of a new Micron PC featuring a 200 MHz Pentium Pro and a whopping 64 MB of RAM. The Pentium Pro was being publicly hyped as optimized for 32 bit applications and so I elected to put the fully 32 bit Microsoft Windows NT 3.51 on it instead of its consumer counterpart, Windows 3.1. Windows 95 would debut later that year, but was not yet available, except as rumors of the upcoming next “Chicago” release of Windows.

Fast forwarding to 2007, I purchased a near clone of that 200 MHz Micron PC, the original having long since gone to the PC graveyard. I fully restored it and endowed it with a dual boot of Windows 95 and Windows NT 4.0. About 4 years later, we purchased a new house and moved, and the restored PC was heavily damaged in the process. The heat sink came loose from the CPU and the motherboard was badly gouged in the near vicinity of the CPU. The machine was “toast”. For the next four years, I scanned eBay daily looking for the identical motherboard make and model so that I could replace the damaged one and breathe new life into the now cold, quiet machine. I finally found the motherboard I was looking for a few months ago and managed to accomplish the replacement just a few weeks ago.

This is really where this post begins. After I swapped in the new motherboard, reconnected everything and powered up the machine for the first time, I was relieved to see the BIOS screen pop up. The “new” motherboard was good and was running successfully. Unfortunately, the motherboard was not IDENTICAL to its predecessor. It was a slightly later revision, and when I booted the Windows 95 partition, it experienced this higher revision as a completely new motherboard, and dutifully re-enumerated all of the devices on the board (… and there are a LOT of them!). After that, and a few more oafish complaints, it settled down and picked back up where it had left off just before the damage occurred 4 years earlier.

The Windows NT 4.0 partition was not nearly as cooperative. When I attempted to boot it, it gave me an obscure, and as it turns out, VERY misleading, error message about missing multi-processor configuration files and halted the PC. Hunting around on the web, I discovered that this was Windows NT 4.0’s arcane way of indicating to me that it had noticed that the hardware had changed under its feet. This it considered to be a security issue, and Windows NT 4.0 refuses to boot when this happens. The long and the short: Windows NT 4.0 was “toast” and the highly nuanced and extensively configured installation I had established on the machine was never to be seen again.

I was bummed of course, but then decided that this was an opportunity. The original 200 MHz Micron PC had been delivered with Windows NT 3.51 on it, and I decided to reload the Windows NT 4.0 partition with this original operating system instead. It would be fun to experience life the Program Manager / File Manager way again, right? Wrong! 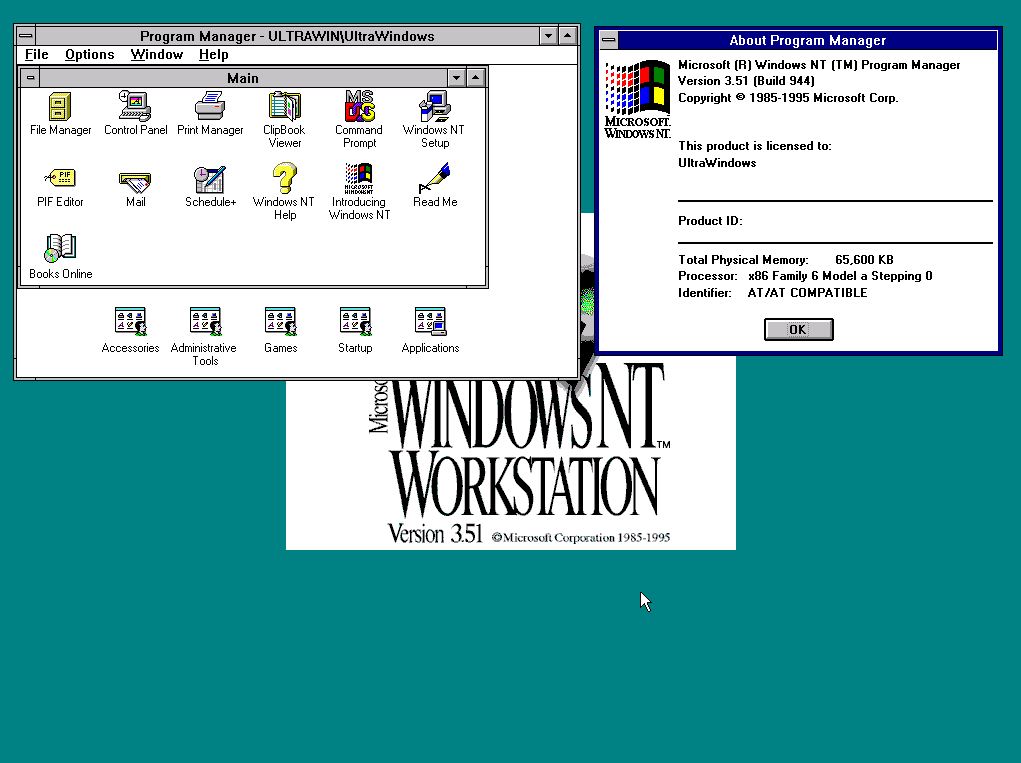 The title of this post says it all. The Macintoshes of the day were largely “Plug and Play” – they just worked. I had forgotten, but very quickly and very painfully relearned, that the PCs of the day were all “Plug and Pray”. NOTHING seemed to work without extensive effort and much tinkering with obscure configuration files.

Simply getting Windows NT 3.51 to install was a struggle. The installer was a combination of 3 floppies and a CD-ROM, since most PCs of the day could not yet boot off of CDs. Hence you booted the installer from the floppies and then progressed to the CD-ROM once its driver had been loaded. This sounds good in theory, but in practice, the Windows NT 3.51 installer, after consuming all three floppies, incongruously asked for the FOURTH floppy. There was no fourth floppy! What to do, what to do? Much Google’ing later, I discovered that this was Windows NT 3.51’s “helpful” way of indicating that it had not been able identify the CD-ROM device, and thus planned to proceed with a fully floppy based install (some 20+ floppies as I recall).

This was a bit of a setback, and I spent the next several hours attempting to locate and then force the installer to load, the driver for the CD-ROM. Since the original machine had been delivered with Windows NT 3.51, I had the driver – there was no issue with that. The trick was getting it onto a separate floppy, and figuring out what additional support files had to be on the same floppy in order for Windows NT 3.51 to accept it and load it. This took much trial and error, but I was eventually successful, and eventually got Windows NT 3.51 to install.

The net result was not pretty. There was only VGA graphics, no sound, and neither of the Iomega drives (ZIP and Jaz) was recognized. I still had the original video drivers and they installed with minimum pain. It took only a few times to get them to “take”. For PCs of the day, that was pretty good. The sound drivers were a bit more challenging. Again, I had them, but it took much effort to sort out the NT 3.51 ones from the NT 4.0 ones and then get them to install and run. Eventually I prevailed there too, and glorious sound resulted.

Phew! Getting a PC to simply load and run an OS was hard work! By now I was really beginning to appreciate my vintage Macs. I have done a LOT of hardware work on vintage Macintoshes, and have reloaded a lot of operating systems on them. It is child’s play compared to the equivalent on a PC. Mac’s just work! Dealing with new hardware on a Mac was (and still is) equally simple. Load the system extension for the new hardware, plug in the hardware, and everything just works. It was so simple. By contrast, doing the same sort of thing on a PC was well beyond the reach of the average user of those days (and even more so today).

The fun had really just begun however. Those two Iomega drives were still invisible to Windows NT 3.51. I located my old IomegaWare CD and loaded the drivers it contained. While this was successful, all hell broke loose afterwards! Why? The drivers went in successfully, resulting in two new drives being added to the system configuration. This shifted most of the Windows drive letters by one or two letters, breaking many, many things that had previously been working. Critically, the Windows NT 3.51 boot partition, which had been F:\, suddenly became G:\, throwing off everything that depended on the drive letter – and that was a lot of things.

Happily, Windows NT 3.51 itself was flexible enough to deal with the change on the fly, and so the OS booted up, but after that I was greeted with an unending onslaught of error dialogs. As fast as I could clear one, two more would pop up. It took about ten minutes just to clear the error dialogs after that initial, post Iomega driver boot.

I’m really glad that (a) I’m a geek, and (b) I have lots of prior experience with this sort of thing. I had half a clue where to look to undo the damage, and therefore reluctantly started on that arduous task. After what seemed like hours of trudging through obscure .INI files, and even more obscure Registry entries, I finally got most of it corrected.

The next boot resulted in only two errors, but one of them was truly pernicious. Somewhere, deeply hidden in the secrets of the Windows NT 3.51 startup process, something still had a reference to a startup program on the F:\ drive. This was now the Iomega Jaz drive, and the system got itself into an endless loop of error messages about the F:\ drive not being ready. Clearing the dialog just resulted in another of the same, and there was no way out. Eventually I popped an old Jaz disk into the drive, hoping against hope that this might break the cycle, and thankfully, it did. The referenced program was of course not found on the Jaz disk, but the new error dialog about THAT allowed itself to be dismissed and done with.

Finally, as long as I kept a Jaz disk in the Iomega Jaz drive, the system would boot with only one dismissable complaint at start up. This was real progress! 🙂

It took me two days to hunt down that elusive reference to F:\. It was in an oddball location deeply embedded in one of the incredibly obscurely named Registry keys. Once removed, peace reigned supreme.

Just as I thought I was over the worst, I made one final serious mistake. Getting on the web would be nice, wouldn’t it? Well, I thought so anyway, and to accomplish this I tried to load Internet Explorer 5.0.1, the highest version of Internet Explorer that would run on Windows NT 3.51.

WHAT a mistake! I won’t go into the gory details, but the installation got nearly to the end, then threw off a series of incomprehensible error messages and ended. The resulting partial IE 5.0.1 would execute, but would draw only an empty window, and with no menus at all except for File, Quit. It was quite useless. Worse still, it had loaded the dial up modem stack, assuming that like almost all PCs of the day, this one used a modem for connectivity, which it did not – it is on the HappyMacs network.

I did my best, deleting all the files I could find, but all subsequent boots produced reams of IE 5.0.1 related error messages. After many hours of once again trudging through obscure .INI and Registry entries, I had eliminated all but one of the offending references to MSIE5. It took another day or so of hunting to find and kill the last one.

Here is the point of this long diatribe (and I hope my outrage at this ridiculous ordeal is coming through loud and clear!). Ordinary users should not have to deal with this sort of Microsoft-authored stupidity. There is just no excuse for it.

Apple has had the right approach all along. Control the full user environment, both hardware and software, and you can give the user a smooth and seamless experience. It is only recently that Microsoft has finally gotten this concept through its thick head and started to offer integrated hardware-software products such as the Surface. A bit slow on the uptake there Redmond! 🙂 Meantime for you retro PC enthusiasts, a word to the wise – installing Windows NT 3.51 is not for the faint of heart!