One of the long forgotten gems of the Macintosh world is the excellent and compact word processor, WriteNow. In the September 1993 edition, Macworld awarded WriteNow its World Class Award for the Word Processor category, edging out all other contenders, including Microsoft Word 5!

The Wikipedia entry for WriteNow summarizes the tale of this product perfectly:

“WriteNow was one of the two original word processor applications developed for the launch of the Apple Macintosh in 1984, and was the primary word processor for computers manufactured by NeXT. WriteNow was purchased from T/Maker by WordStar in 1993, but shortly after that, WordStar was purchased by The Learning Company, who ended sales. It remains fondly remembered to this day, for a combination of powerful features, excellent performance, and small system requirements.” 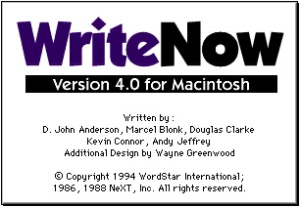 The Wikipedia entry continues at a later time, extolling the outstanding performance and GUI strengths of WriteNow:

“WriteNow represented what many saw as an ideal Macintosh application. It had a simple, intuitive graphical user interface (GUI), no copy protection, and it worked in practically every revision of the Macintosh operating system, including in the Mac 68k emulator on PowerPC Macs and in Mac OS Classic mode under Mac OS X. Its biggest claim to fame, however, was its speed. It was written in assembly language (Motorola 680×0) by a group of developers who had a reputation for producing extremely efficient code. The user interface was unusual in that while the typical word processor had a ruler embedded in the main document window, WriteNow used a separate, fixed window that could be sent into the background, freeing screen space on the compact Mac’s small nine inch screen.” 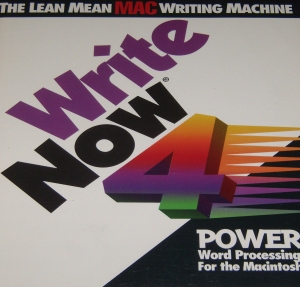 All of this sounds compelling enough by itself, but you need WriteNow, right now, because in addition to its outstanding performance, small size and clean, easy to use GUI, WriteNow sports one last killer feature: it can read and write Microsoft Word files, as well as WordPerfect files, in addition to its own “native” format.

I tested WriteNow on two machines, a Quadra 840AV, where WriteNow ran native on the machine’s 40 MHz 68040 processor, and on a Power Macintosh 7300/200, where it ran under emulation on the beefy 200 MHz PowerPC 604e. I am happy to report that performance was snappy and responsive in both cases.

It is interesting to compare file sizes as well. Using a specific test document with 51,494 characters, organized as 9661 words and 1026 lines, the file size for the MS Word .doc format of this file was 66,334 bytes. The WriteNow native format for the same document was 92,251 bytes, actually larger than the MS-Word format. This came as a bit of a surprise, but I guess WriteNow can’t be faster AND smaller!

Pick up a copy of WriteNow and try it out. It remains a valuable word processor to this very day – lean, fast and light on resources… isn’t that what good software is supposed to be all about?

You can get WriteNow from the ever helpful Macintosh Garden, at http://macintoshgarden.org/apps/writenow