Welcome to the final installment of our six part series on networking classic Macintoshes with their Windows peers of the day, and even with Linux. After five preceding posts in this area, this is the the concluding post of the series, the promised “grand slam of networking”.

Over the past five posts, we have examined a variety of ways to network a classic Macintosh with Windows and even with Linux. Each method examined has had its own specific uses and its own specific strengths and weaknesses. However, thinking back to how this series began, and the search for networking solutions to the computational “tower of babel” that exists here at the Happy Macs lab, it is only to be expected that eventually, we would arrive at a networking approach that would encompass all of the previously examined mechanisms and in so doing, surpass them all. And that is just what has happened. The approach used, which I have alluded to in earlier posts as “the grand slam of networking” is the topic of this final blog post in the “network your classic Macintosh” series.

Encompassing all, and in so doing, surpassing all, is a tall order. Happily, this order has been filled by a networking hub so powerful and so all-encompassing that you have to experience it to believe it. What is this all powerful networking device, you ask? Is this some exotic piece of vintage hardware that I have been cleverly keeping under wraps until this post, so that I could unveil it at the last moment and dazzle you with its brilliance, rather like Steve Jobs might dazzle an audience with yet another of his iconic “just one more thing” unveilings?

No! … and yes. Steve Jobs DID dazzle audiences with this particular device when it was announced, but it is no longer all that exotic. Many of you may still have one in your homes to this day. The unluckier ones of these may perhaps have been put out to pasture, quietly gathering dust in some far corner, but the rest may still be in active use. I speak of the Power Mac G5 of course! 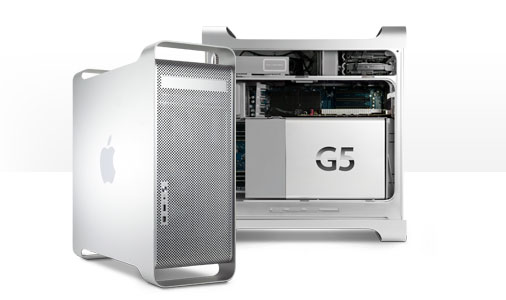 Surprised? You really shouldn’t be. If anyone could simplify a complex topic like networking, we should expect that Apple could, and with the Power Mac G5, this is exactly what they did. Running Mac OS X 10.4 Tiger, the Power Mac G5 is capable of acting as central networking hub for ALL of the networking techniques we have examined thus far in this series. Now of course, ANY Mac running Mac OS X Tiger will fill the role nicely, but here at the Happy Macs lab, it is a Power Mac G5 Quad that does the heavy lifting, enabling all the other computers on the LAN, Mac and Windows alike, to trade files with ease.

Let’s look at this in a little more depth. In this series of posts, we have examined the use of SMB, FTP, HTTP and finally SSH, all as networking enablers. Can a stock Power Mac G5 support all of these seamlessly? The quick answer is “yes”.

The longer answer is that the general approach is to use the Power Mac G5 as a central file server, and allow each client machine to connect to it via whatever approach works best for it. In this role, the Power Mac G5 acts as the network’s multilingual “tower of babel” translator. Each client computer may only be able to speak its own language, and not that of some or all of the other computers, but through the multilingual common ground of the Power Mac G5, each computer can communicate with all the others.

How does this work? As a way of illuminating the answers let’s examine each of the potential networking approaches in the context of a central Power Mac G5 hub.

AFP (Apple Filing Protocol): “Wait a minute!”, you are exclaiming. We didn’t even discuss this one in the preceding posts of this series!”. You are right. We did not. This is because it is typically only used between Macintosh computers, and not between Macintoshes and Windows machines. This is not always the case, but it is most of the time. If you happen to be lucky enough to have Microsoft Windows NT 4.0 Server (which I do not), this OS CAN be used to network classic Macintoshes and Windows. However, for the purposes of this post, discussion of AFP is restricted to networking Mac OS Classic to Mac OS X Tiger. We are adding a Power Mac G5 running OS X Tiger to our solution, which brings this new capability along with it, and so we will briefly digress and discuss it.

Networking between Mac OS Classic and Mac OS X via AFP is not entirely without its issues. Mac OS X Tiger cannot connect to a classic Macintosh this way, but happily, a Classic Macintosh CAN connect to a Tiger G5 using AFP. Hence, by way of a shared folder or a shared volume on the G5, files can easily be transferred between a Tiger G5 and a classic Macintosh in either direction. To enable this, simply go to Tiger’s Network control panel, select the interface you are using, and examine the details. Click the AppleTalk tab, find the checkbox labeled “Make AppleTalk Active” and click it. This enables AppleTalk for that interface. 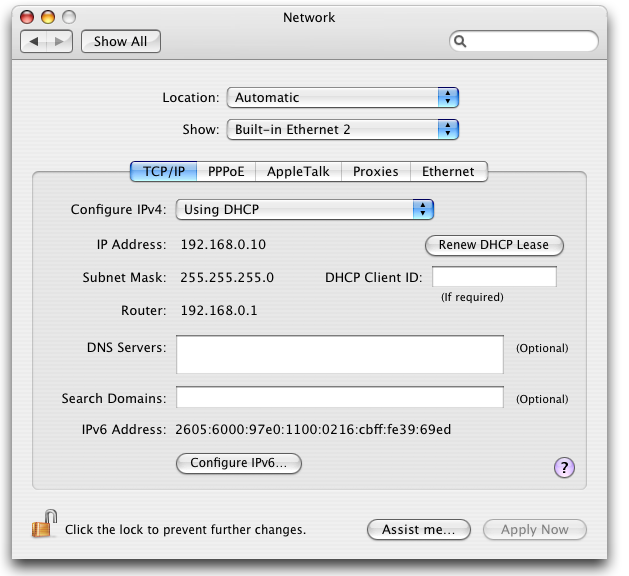 A word to the wise. Make sure that you never enable AppleTalk on more than one interface at a time. It IS possible to do this, but there are complications. Stick to one interface at a time and your life will be easier. With that one caveat out of the way, you are done – that is all it takes. Your Tiger G5 will now show up in the Chooser or Network Browser of any classic Macintoshes on the network, and they will be able to mount, read and write the shared folder(s) and/or volume(s).

SMB (Server Message Block): Enabling SMB on a Tiger G5 is a simple trip to the Sharing control panel. There, find the “Windows Sharing” checkbox and check it. That’s it! This starts Tiger’s SMB server and your Power Mac G5 will now show up in the Neighborhood Network of all the PCs on the network. As long as things are properly set up on the PC, it will obligingly reciprocate, showing up in the Network area of Finder on the Mac. This enables completely bidirectional file transfers via SMB. See the first two posts in this networking series, which concerned themselves with the topic of networking with SMB, if you are in doubt about how to set things up on the Windows side. 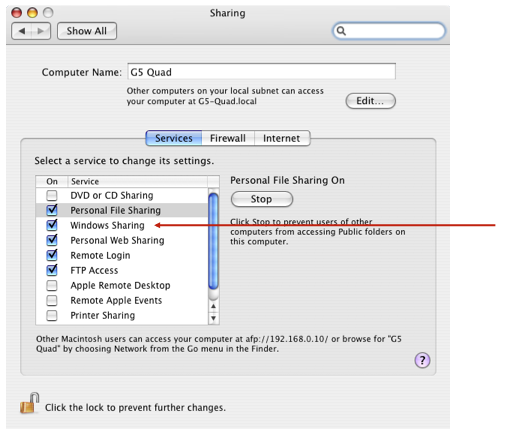 FTP (File Transfer Protocol): Like SMB, this one could not be easier. Enabling FTP is just a simple trip to Tiger’s Sharing control panel. In this case, find the “FTP Access” checkbox and check it. This action starts Mac OS X Tiger’s internal FTP server and your Mac will be visible, at its currently assigned IP address, to all FTP clients on your network, be they Mac OS Classic, Mac OS X, Windows or Linux. Of course, using any Mac OS X FTP client that you favor, you can also access any other FTP servers that may be on your network from your G5. The net result (pun intended!) is full bidirectional file transfer via FTP.

HTTP (Hyper Text Transfer Protocol): This one is a little more interesting. When we examined the use of HTTP as a file sharing protocol in an earlier post, the narrative was built around the use of Mac OS Classic’s Personal NetFinder capability. Of course, as we pointed out, a similar capability carries over to Tiger’s web server, and it can be leveraged for one way file sharing, outwards from your Tiger G5 to any web browsers on your network.

Similarly, assuming you have Personal NetFinder turned on any Mac OS Classic machines on your network, you can point your Tiger-based web browser at any of those machines and download files from there. The overall result of this is file transfers from your G5 to any other machine with a web browser, and file transfers from any machine running Personal NetFinder to your G5, all via HTTP.

To enable this, you will need to set up Personal NetFinder on any Mac OS Classic machines that you may wish to share files from. See the recent post on using HTTP as a file sharing mechanism for detailed information on how to do this. On your Tiger equipped G5, simply pop over to the Sharing control panel, find the “Personal Web Sharing” check box, and check it. This starts Mac OS X Tiger’s web server and you are off and running.

SSH (Secure Shell): Enabling SSH on your Tiger G5 is again a simple trip to the Sharing control panel. This time, find the “Remote Login” checkbox and check it, an action which starts Tiger’s built in SSH server. Now, from any computer on the network with an SSH client, you can connect to the G5 by specifying your userid on Tiger and the G5’s IP address. As we pointed out in our last post, this is especially convenient from Linux, where the “sshfs” program implements a user space file system built around the SSH protocol.

Like AFP, this is essentially unidirectional file sharing, with the Tiger G5’s SSH server providing the common access point, but like AFP, this can be used to achieve file transfers between the G5 and any other machine, and visa-versa, as long as the other machine has an SSH client.

Alright! We have reviewed every file sharing technology examined thus far in this series – SMB, FTP, HTTP and SSH – and seen that a Tiger equipped G5 supports them all. So, coming back to the original question, loosely rephrased as “can a stock G5 support all of the previously mentioned networking techniques?”, we can now see that the answer is a resounding “Yes!”. I hope that this will bring you to the conclusion, as it has me, that a Power Mac G5 running Mac OS X Tiger is the true “grand slam” of vintage Macintosh and Windows networking servers!

And so this series ends. We have looked at all of the common ways of networking classic Macintoshes with their Windows peers, and a few of the uncommon ones as well. While there are a few more techniques we could yet delve into (NFS, for example), I don’t think that they add enough incremental value to warrant further exploration. So, let’s draw this series to a close. After six posts on this matter, we are all now experts in the sometimes arcane topic of how to network Classic Macintoshes with both Windows and Linux.

I hope that this series was helpful and that you will be able to put your newfound networking skills to good use! Happy Networking!

2 thoughts on “Network Your Classic Macintosh with Windows, Part 6 – The Grand Slam”